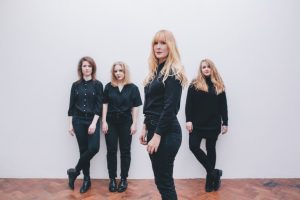 Framed as the “must see live band” in london at the moment, The Franklys are premiering the official music video for their song “Not Guilty.” With a chatter of guitar driven energy, the song keeps a punk aesthetic to its bouncy progressions. The music video features bold palettes of color dancing in the background of individuals letting the groove take over. “Not Guilty” is off of the upcoming EP, Framed, which is out April 5th via Hälta Hälta Records. The music video was directed, shot & edited by Ben Pollard and can be seen below!

“It was awesome to be working with Ben Pollard again following his great job with our ‘Keeper’ video. We wanted the video to be as fun and vibrant as the song, so he threw all sorts of colours, shapes, and effects on there.” – The Franklys

Drawn to the raw and engaging indie rock scene emerging from the UK, Swedish Jen Ahlkvist and Fanny Broberg packed up their guitars to come to London intent on carving out a new vital sound. After crossing paths with bassist Zoe Biggs and drummer Lexi Clark, The Franklys were formed with a determination for creating energetic and powerful rock music.